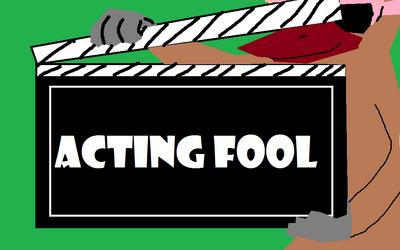 Alice the zookeeper was extremely annoyed, for she had enough "messes to clean up" as it is, yet paperwork was filed for two new animals that day (both female): one is a lemur, born first-class but raised last-class. She lived in America her whole life (or at least for four years), and knew NYC like the tip of her tail, but was a "rogue" up until now (she hated it when Alice called her that) and was long-passed-due for reassertion with her own kind (and, as both by her genius mind and the impulses that run in her royal family, she over-packed all sorts of things she doesn't even need!). The other was a "duckbill" mammal named Estivanta Nicole Kytrina, or "Stinky" for short.

Stinky the platypus thinks she has the making of an actress, but her "lines" live up to her name. Also, When King Julien learns that Marlene's ex-roommate, Rhona the walrus (AKA "Blowhole's spy") used to call the lovely otter "Rat-face" and thought it'll be funny if everyone called her that with a "temporary" tattoo he made to put on her back (HELLO! MY NAME IS "RAT-FACE"), but his twin sister, Duchess Lucinda, warned Marlene, who punished the intention by messing with the throne. When she noticed the "Prank du Vengeance", and being low on material herself since she got caught up unpacking the moment she moved into the zoo, Lucinda saw an grand opportunity to get her brother to loose at "Cry Mercy".

While waiting for Marlene to get back, Lucinda overheard the penguins conversation... apparently they had a misunderstanding when Private said "All I want for Christmas is some two front teeth" (he really meant false-teeth from the "Toufraunt" gag-factory. That particular brand sold them in six-pack designs: Hobo, Pirate, Vampire, Wolf, Bigfoot, and Glow-in-the-dark Alien... comes with offer to win free costume-related prank-gear and a Joy-buzzer, and the contest isn't final until next November), and Stinky, the other new-girl, made a different mistake for it and thought he was writing a screen-play, and did a bit to show that she "improvises" her lines: "Should not such fame be inscribed on cheese, as the vermin of this world ingest more to their appetites then heads intake to there fulfillment and hearts absorb to there passion, 'tis why the lives we live are always a mess." (the only one that liked it was Rico, though he admitted that he preferred it that she made up a verse that didn't involve "hearts and passion" on account of his gooey-love-mush-sensitivity), and what's worse was that she was going to perform the play she's written (entitled "Waiters Waters off of the Serene Siren's Shore") for the next group of humans tomorrow. Lucinda offered Marlene a favor for making her brother cry mercy (or at least attempt to) while she unpacks her things. Marlene refused at first, but a crate of skunks were let loose on her habitat... guess who the "stinker" was that got Marlene to accept Lucinda's deal!

The penguins couldn't believe how many people came to see Stinky, until Kowalski ran the numbers and found that they were only there because they never seen a platypus before... not because they enjoy the show. All four penguins, in there own separate ways (as not to gang up on her for too much discouragement), tried to inform Stinky about the true ratings of her "audience", but she was so busy dreaming of Hollywood to even hear them. (Kowalski: "Apparently, they hate you." Stinky: "They love me! They really love me!")

Meanwhile, at the Lemur Habitat, King Julien was busy gathering ammunition for his prank war against Marlene, for it was bad enough that he lost his throne (AGAIN!!!!), but with Marlene's cruel jokes always, somehow, always one step ahead of his own, Julien was close to losing his "dignity", and what's worse was that Lucinda was too busy unpacking her luggage (so many boxes that it's hard to believe her people relatives are povertous) to help him. "Did you at least get my cake down from the roof of that church?" Julien asked, "I am betting that a face of frosting shall be keeping Marlene from torturing me!" "Oo! Sorry bro," Lucinda said, being honest in spite of her giggle, "I came for it too late... this crazy old man with the mad fiddle-playing skills had already ate it!" "I feel like somebody hit me in the head with a brick!" Julien complained, "Could I at least leave Mort here to help you with your luggage?" "Don't bother," Lucinda grinned, "an old friend of mine is already at it and he is very strong, so deal with your own problems, okay, and take your servants with you." But just as Julien left for another "battle" against Marlene (taking Mort and Maurice with him), the "old friend" of Lucinda turned out to be Roger Alligator, and his singing of the "Blue Rite River's Toilet Cakes" Jingle drove her bananas! "Maybe the Friedmen's were onto something when they flushed you!" She teased him, but she shown embarrassment when the tabled turned on her as Roger found the bags were full of rocks, dirt, wood, hay, and toys she should've gotten rid of years ago.

That night, Kowalski had been working on a device to help open the eyes of the star-struck Stinky, a Lie Detector to scan the "ratings" on the next "members of the audience." All that was left was to test it, and just in time to overhear the talk between King Julien and Duchess Lucinda. As he hoped for, it didn't "beep" except on the parts that one can tell is a lie by looking at the two lemurs faces, like when Lucinda said she knew nothing about Marlene's winning the prank war (she's been telling the otter all about her brother's prank-master strategies), or when Julien said he wasn't afraid of Roger (he obviously is).

Later, Kowalski's invention was put to use at the Platypus Exhibit, and most humans couldn't pick up a word she said, while the few that could slightly understand animal talk didn't like Stinky's material (the only ones that could fully understand her were the Dehauntedo children, Zeke and Amy, who stopped by to check on Duchess Lucinda... and ask for jobs as Junior Zoo Keepers... and they thought it could use some improvements too!), but Stinky's reaction was a surprise: "Everyone's a critic, but I'm not performing for animation... on stage, acting comes from action and emotion! It's a passion!!! Drama, Comedy, all life's exaggerations woven together into stories the world gathers to see. Someday, I shall get my lines correct, but one must keep rehearsing until that happens." Impressed by how she put it, the penguins decided to help her by showing her the most dramatic moments in the zoo... like when Julien caught Lucinda giving intel to Marlene about a pit full of Roaches and what bargain this was part of. Julien was outraged at his sister, and they were fighting as soon as Marlene said the deal was off ("if anything, you should've done something for Marlene and have her owe you big time!" "No, my brother, that is something you would do... and I am not you!!!"). The argument inspired Stinky for another play she could write, direct, produce, and (of course) star in: When Live Life Gets Intertwined -Twinned.

Stinky is a duckbill platypus, and her full name (Estivana Nicole Kytrina) is shortened to Stinky so she could have one name instead of three. Her habitat used to be the Giraffe Habitat, this filling the void on "the charts". Also, her "improvised" line is one of many misinterpretations of Shakespeare, and her character is voiced by Victoria Justice.

While Kowalski was telling Stinky that the people hated her, there's a vocal error.

As King Julien was showing the temporary tattoo to Maurice, Fred the squirrel is seen in the background. (Fred didn't have any lines... makes sense since his cheeks were stuffed from nut-gathering.)

Marlene's prank on Julien (involving a pair of scissors) makes the second time King Julien's throne fell apart on him... the first time is on "All King, No Kingdom".

Julien gets the skunks into Marlene's habitat the same way he did it to the baboons on "Out of the Groove", but this time, the skunks can actually be seen (backside and tails only, of course).

Amy and Zeke are the first Jr. Level Zookeepers in Central Park Zoo History... as far as Alice can tell, if she even cared.

There are two titles Duchess Lucinda can't stand being labeled with: "rouge" (the ultimate blow to the ego of several creatures, especially female lemurs), and "princess" (unless she gives someone permission to call her that royal title in the same moment they do it... extremely rare privilege). Also, the "useless junk" she "over-packed" spoofed several media shout-outs:

Lucinda and Roger were both exotic pets and shared a childhood friendship, which was only stiffed for a few short seconds when he annoys her with toilet-bowl-cleaner jingles (he recites the one heard on an episode on The Mighty B).

When Duchess Lucinda gave recognition to "The fiddler on the roof", King Julien said he feels like he's been hit in the head with a brick. This is indeed the last part of a four-part brick-joke (see Dart of Shame, Double Royal Trouble, and Officer X on the Loose for the rest).

King Julien's war-crown is the same mask-like thing that he worn while doing battle against "the red night-goblin" (AKA Santa Claus) in the special "Merry Madagascar", except it's painted into different colors.

Stinky practically winks at the fourth-wall when she said that this isn't a cartoon, as to humor those who know for sure it really is!

Kowalski's Lie Detector is made out of pizza-boxes, empty soda cans, and a paperclip... just like Dr.Cockroach's super-computer in Monsters Vs. Aliens!