The Golden Bamboo lemur (Hapalemur aureus), bokombolomena or varibolomena in Malagasy, is a medium-sized bamboo lemur endemic to south-eastern Madagascar.

As its name indicates, this lemur feeds almost exclusively on grasses, especially the giant bamboo or volohosy (Cathariostachys madagascariensis) feeding on new shoots, leaf bases and the creepers. The growing shoots of this bamboo contain 0.015% (1 part in 6667) of cyanide. Each adult lemur eats about 500 g (18 oz) of bamboo per day, which contain about twelve times the lethal dose of cyanide for most other animals of this size.

They live in small groups of two to six individuals and have a home range of up to 80 hectares (0.31 sq mi). but usually move less than 400 m (1,300 ft) in a day. Females have a gestation period of approximately 138 days and give birth to one infant (occasionally two) at the beginning of the rainy season, in November or December. The young are highly dependent on their mothers and are kept hidden in dense vegetation for the first two weeks.

The golden bamboo lemur was discovered in 1986 by Dr. Patricia Wright, in what is now Ranomafana National Park. The park was opened in 1991 to protect this endangered lemur, as well as several other lemur species and its flora and fauna. The population is declining, predominantly due to hunting and to ongoing habitat loss; with only about 1,000 individuals remaining. The principal loss of habitat is due to slash-and-burn agriculture or the harvesting of bamboo, for use as a building material as well as for carrying water and basket making. The species is classified as critically endangered by the International Union for Conservation of Nature (IUCN) and is listed on Appendix I of CITES, CITES (the Convention on International Trade in Endangered Species of Wild Fauna and Flora, also known as the Washington Convention). 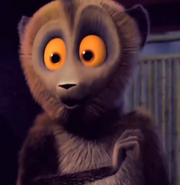 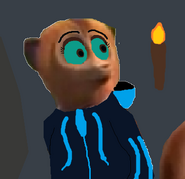 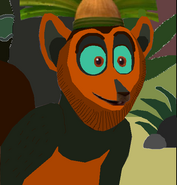