Together with the red ruffed lemur, they are the largest extant members of the family Lemuridae, ranging in length from 100 to 120 cm (3.3 to 3.9 ft) and weighing between 3.1 and 4.1 kg (6.8 and 9.0 lb). They are arboreal, spending most of their time in the high canopy of the seasonal rainforests on the eastern side of the island. They are also diurnal, active exclusively in daylight hours. Quadrupedal locomotion is preferred in the trees and on the ground, and suspensory behavior is seen during feeding. As the most frugivorous of lemurs, the diet consists mainly of fruit, although nectar and flowers are also favored, followed by leaves and some seeds.

The black-and-white ruffed lemur has a complex social structure and is known for its loud, raucous calls. It is unusual in that it exhibits several reproductive traits typically found in small, nocturnal lemurs, such as a short gestation period, large litters and rapid maturation. In captivity, they can live up to 36 years.

Notable Black and white ruffed lemurs in the Madagascar universe[] 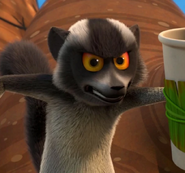