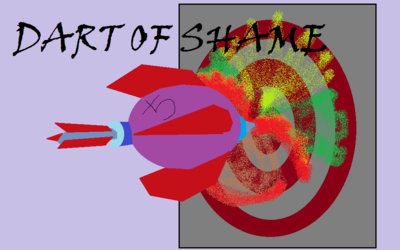 As the penguins were trying to come up with new "communication systems" for their next trip outside the zoo, Skipper and Kowalski are caught in an argument over which would be less obvious to human eyes: small-rockets camouflaged as carrier pigeons (Skipper) or telephone/holographic-projectors cloaked as pet collars (Kowalski). Rico was bored with the lengthy meeting, and went outside the HQ to see if he could blow something up and get away with it. Private decided to take along, figuring that Rico's mischief would be much "quieter"... turned out, he spoke to soon: the good news was that it was that the zoo was closed, so not even Alice the zookeeper was around, the bad news was that a few people in the city might've heard the noise of this emergency conference around the lemur habitat anyway. Skipper postponed the meeting they're already in (as to find out what "Ringtail" is up to this time), only to find one big catch:

King Julien wasn't home! Skipper assumed another "kingnapping" occurred while Mort and Maurice had their hands full with the other animals. Marlene stated that the royal pest wasn't stolen (he was just crashing a wedding party in the part of NYC known as "Little Italy") but everyone at this meeting was so fed up with his recent "games" (from snatching Marlene's finger paint and dumping it onto Ted the polar bear's fur, to insulting the gorillas and pulling out the flamingos feathers to frame them. He even tricked the camels and the llamas into a tug of war against each other!) that they prefer he had been. Although the baboons weren't messed with (this time), Darla had her say when she brought up the groove-jar mess and the disadvantage that she can't use the same "punishment" twice on the same victim: "You'd think he'd apply that lesson of apologies to all things that upset others, or at least more often then this! If we didn't know better, we'd say he doesn't have no Shame!" Skipper did a brief telling of the first and (so-far) only time Julien ever felt guilt, saving them both from Joey. The others weren't convinced... but a mysterious figure (species unknown, for it was covered in white "shrouds", but it was obviously female) intervened, took Skipper's word for it, and foretold that the next time his majesty does something he should regret but doesn't, she'll unlock that part of him "against his pettiest whim" and, without further explanation, she disappeared.

Such a moment happened sooner then anyone expected, for after King Julien came home for the night (exhausting from "hiding the wedding cake on the roof"), the first thing he did after breakfast was bother the chimps again, this time by using ropes to turn Phil and Mason into marionettes, and after he was done "playing" with them and "puts them away" on a tree-branch, he gives a show for them since they are "just hanging around", and danced around paying no heed to how uncomfortable the chimps were in their position (let alone a mysterious snickering from the next tree over, as the mystery girl held out an island-design dart-shooter...the kind one has to blow into). Suddenly, Julien's dancing was interrupted with sudden prick on his tail and (though at first glad it wasn't his feet) he collapsed onto the ground... crying! The mystery girl came out of hiding, untied the chimps, and gloated how her "Alchemical Dart-of-Shame" worked, but her celebration was short-lived when the penguins rushed in to help. Kowalski demanded to know what's in it to make an antidote, but the mystery girl only laughed and claimed alchemy is half-science-half-magic, so even if she told him he's useless for a head start (the rest is up to King Julien himself!) unless he's willing to be open minded enough to enlist an enchanter's aide. Then the mystery girl disappeared again, leaving Kowalski with two conclusions:

While handling the second notion, the rest of the team (plus Mort and Maurice) had cornered the helpless lemur-king at both ends of his royal secret passage between the lemur habitat and the zoo hospital, and noticed that he (with his face covered) was uncontrollably fessing up to the mistakes of his prince-hood that practically cost him his parents' lives and (of all shock and surprises!) the disappearance of his twin sister, Lucinda!

In a final attempt to calm him down, Maurice and Skipper (in their own separate ways) reminded King Julien that he's a self-proclaimed leader, and thus not entirely irresponsible.

He believed them, which helped regain the fact that he believes in himself, but the Dart of Shame still had power over him, and thus he was caught in a struggle between his true, cocky self and his own, super enhanced sense of doubt until Kowalski and Darla used an extraction ritual they could actually agree on to neutralize the effects of the dart... the only side effect was lulling King Julien to sleep for at least a week.

By the time Julien finally woke up, he was his old semi-annoying self again... aside from being better able to learn from his mistakes, it was as though the Dart of Shame never existed.

Back in Penguin HQ, Kowalski was putting rockets and holograms together as a compromise and hopes to test it to find out who the mystery girl really is (to make his "thanks-for-the-tip" moment more personal) leading to a new argument with Skipper, who'd rather use it to see what Alice really does on her "day off". Rico coughed up a stick of dynamite and was about to sneak out again when Private shouted "Have you no SHAME!"

After a brief pause, all four penguins laughed at what was just said.

Meanwhile, in another part of Central Park, the old-crone-squirrel herself (from that cursed treasure mess) was congratulating the mystery girl on a job well done. "If not for that, Duchess Lucinda, his heart would've officially lost it's purity to self-love and unlearned lessons. Which reminds me, only a few more tasks before your training is complete, and the ancient ways will be be with you as a full-fledged alchemist and an honorary pooka."

Duchess Lucinda unwraps her veil, and reveals that she is a female ring-tailed lemur (possibly king Julien's long-lost twin)! She smiles and jokes "Took me long enough."