This was once the shed Mort and Maurice used as there temporary home and party hot-spot in All King, No Kingdom. It's roomier then it looks on the outside, and very few humans (like Amy and Zeke) can access that advantage... to folks like Alice, it's just an ordinary tool-shed.

When Duchess Lucinda officially moved into the zoo, this large space in a small package became her workshop (good thing to because, like her brother King Julien, she over-packs). Considering the Alchemical qualities the area had, like the surprisingly ancient dance floor lights and the portal-exchanging lock and latch (used to keep the likes of humans without the Doolittle Reflex way), the owner of the place wonders if this used to be the spot Salasi Squirrel, the Alchemy Mistress she was apprenticed to, practiced her secret studies before meeting Xantros (AKA: The Golden Squirrel himself), let alone before the Old Oak was even a sprout! Since "Auntie Sala" had completed crossing over to the spirit world, however, there's no way to know until Lucinda, now an Alchemy graduate, can find a way to commune with her.

So far, she had created acid potion water balloons, a living ball of silly putty, several types of anti-venom (especially for the "toxic touch" of Barry the dart frog), and several oddities through a mixture of science, magic, and spirituality. 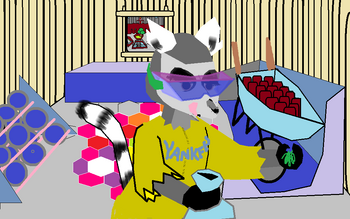 To think, the background is only one room of that palace-like place! 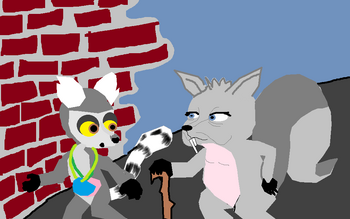