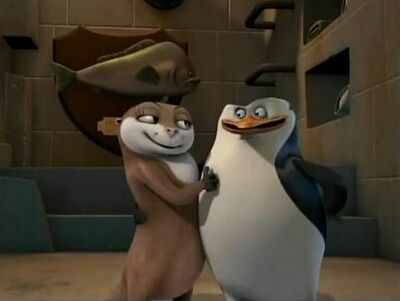 In addition to the Julien and Marlene pairing there is a rumor that Skipper and Marlene are secretly in love with each other.

The pairing of Skipper and Marlene is called, by some people, Skilene, and even though there isn't an episode where they fall in love there are hints in some episodes that they just might be interested in each other.

The fact that Skipper is a paranoid, covert ops character while Marlene has a more level-headed personality is not likely to be real. However, some believe that people who are opposites are more likely to fall in love with one another; proof being the saying: "Opposites attract".

She sighed in relief when she saw Skipper over her after she woke up. That same episode, when they fell into the sewer, she saved him from drowning. Marlene showed a bout of bravery when she confronted the monster, likely to protect Skipper from "it". After they got out of the sewer, Marlene was a bit touched when Skipper said that he wanted to have Marlene with him when he goes into the sewers again.

Marlene asked Skipper (and Kowalski) which bow would look better on her. That means she respects his opinion about her appearance

Marlene danced with Skipper in excitement after she found out she was getting a roommate.

Marlene turned to the Penguins to see if they can cure Mort's foot fetish. When Skipper turned down the offer, Marlene described Skipper's good points to get him to change his mind.

Marlene was concerned about Skipper (and the others) going into the reptile house to rescue Mort, saying "I do not think these are the kind of creatures you can reason with." Though Skipper (thought he) said to leave this to him and the penguins, she tagged along anyway.

She seemed a bit disappointed (and confused) when Skipper wouldn't tell her what he and his friends were doing.

Marlene helps Skipper out during his "gender confusion", to her annoyance. She had high hopes that she could get to know him better, but those hopes were dashed when Skipper finds out he is a boy after all. But he then reassured her by putting a flipper around her (until he called all mammals "morons" which she was offended by).

Marlene chased Skipper around when she wanted a cure, which tells, even in many other instances such as Roomies and Badger Pride, that if Marlene gets pushed to far, she can get very "psychotic". Marlene was happily prepared to hear Skipper say his apology.

Frightened Marlene kept jumping on Skipper whenever she was scared.

After Skipper startled Marlene awake, he promptly calmed her down. When Marlene got him to shore and got any water out of his system, he looked at her dreamily, though this could be because he was dazed. He tagged along with her as they tried to find the monster. When Marlene goes to confront the "monster", he yelled "Marlene, what are you doing?!" in surprise. As soon as they got out, Skipper tells Kowalski that if he's ever caught in the swirling current of raw sewage, he hopes Marlene will be by his side. He also states that she "is actually quite nice" (which is ironic given how disrespectful Skipper is with mammals).

He assured Marlene he could handle the mysterious visitors in the Reptile House.

Though Skipper didn't want to help Mort at first, he changed his mind when Marlene describes his good points. Satisfied, he said "Guilty as charged" and accepted.

After Marlene said that Skipper wasn't "Fun Day material", he said he could handle it and began bouncing on Julien's bounce house to prove her wrong, or possibly to impress her.

When Marlene admitted she was born in captivity, Skipper assured her there was nothing to be afraid of outside the zoo, especially since the penguins would be with her the whole time.

Skipper turns to Marlene for help, understanding what it's like to be a girl. He also put a flipper around her when he said that mammals were morons, which caused Marlene to get upset with him.

When Skipper and his crew went out on a search for Marlene's "date" the date was revealed to be Fred, Skipper quoted "Oh no, not that guy" even when his crew-mates tried to convince him that The Kowalski's device was right he quoted "But Marlene is smart and even though in many episodes he states that mammals are morons. Considering how much he dislikes Alice and the lemurs, it's safe to say he was singling out Marlene. At the end of the episode Marlene had dumped Fred noticing what she thought was humor was just Fred being stupid. After she told the penguins "So it turns out it wasn't him being funny, it was really just him being-" But she hesitated and Skipper finished for her with a grin on his face "Dumber than a sack of hammers". Throughout the entire episode, Skipper seemed the least eager to find Marlene's date, possibly because he has a crush on her or because he didn't trust Kowalski's invention to help her. And when she dumped him, he seemed fairly happy.

When the penguins are spying on the zoo animals, Skipper seems fairly interested in Marlene's secret.

Skipper protected her from Kowalski, Private, and Rico; who were trying to get the jump on him with their weapons, and when Marlene pleaded Skipper to give Hans a second chance, he denies but quickly agrees once he took a second glance at her.

Skipper saved Marlene from a booby-trap. When she was being taken away from the rats, he was sad and angry, which shows that he cares for her. He also stood with his head high and a determined look on his face after they got out of the cave and Fred the squirrel said "Hey, where's the otter?" Showing that he was determined to get her back safely.

Skipper tried to help her unwind when she started panicking about the men in suits.

Skipper was chased by Marlene. Skipper showed that he wasn't fooled by her cute face when she wanted to hear Skipper apologize to her, but he did say that they might do something on her birthday.

When Marlene came to the penguins asking for protection from the badgers, Skipper seemed to be the most concerned for her well-being.

When Marlene panicked after one of the eggs fell from a nest and was saved by Private and Rico, Skipper said to relax. During the whole episode, Skipper told her everything that was going on. He also put his flipper around Marlene when he was explaining to her about Gus.

When Marlene asked about which bow she should wear, Skipper didn't ignore her and answered her question with great enthusiasm.

Skipper knew how Marlene is calm when she hears spanish guitar, so he played it, learning it after hiding 8 years in the jungles of Mexico. Marlene's biggest attraction is also someone who plays the spanish guitar.